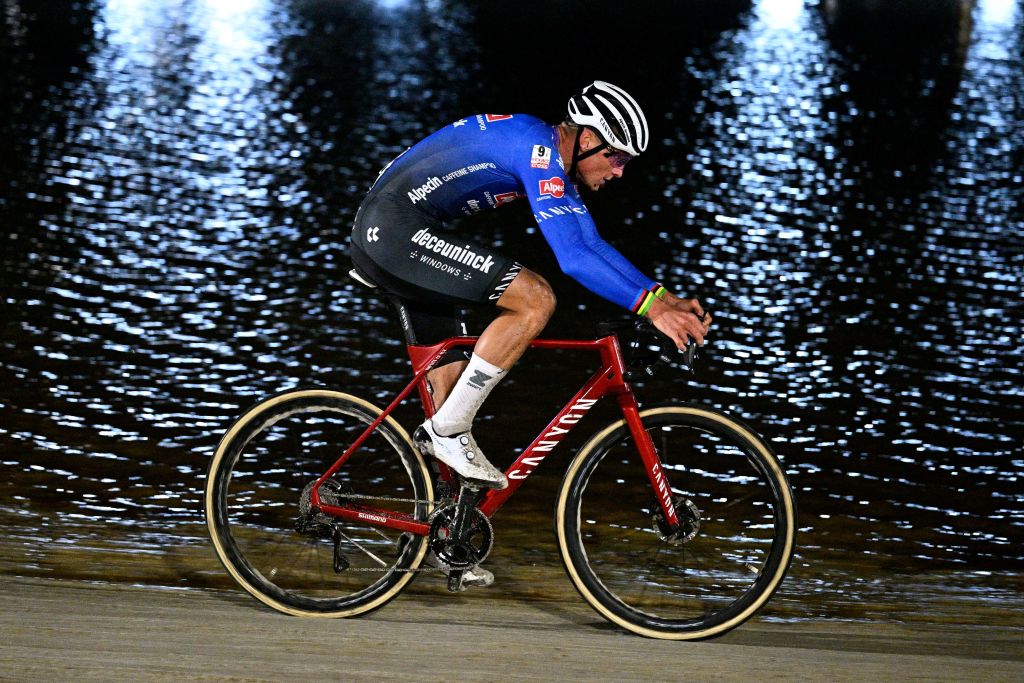 Mathieu van der Poel (Alpecin-Deceuninck) seized the victory in Herentals in the fourth round of the X2O Trofee series, as a rear-wheel puncture did not allow Wout van Aert (Jumbo-Visma) to contest for a final sprint.

The battle of the big two did not disappoint for seven and a half laps, until Van der Poel made a decisive pass on the back half of the muddy course.

Van Aert, who had won the past two editions of Herentals, could not match the pace, and it soon became clear why, as he looked down at his flat tyre before shaking his head and watching Van der Poel slip away.

Van der Poel declined to celebrate on the finish line as a result of the way the race was ultimately decided.

In the head-to-head battle for the X2O Trofee standings, Iserbyt holds a 1:27 advantage over Van der Haar, with Jens Adams (Chocovit Cycling Team) moving into fourth position. Pim Ronhaar (Baloise Trek Lions) moved into sixth place, one spot behind Tom Pidcock (Ineos Grenadiers), who did not race on Tuesday.

Van der Haar grabbed the hole shot with Van der Poel in tow and Van Aert in third position. As the opening lap was covered at full throttle, Adams pushed ahead with Van Aert and Van der Poel. The trio stayed in tandem until the second lap, when the expected battle of the Jumbo-Visma and Alpecin-Deceuninck pair dropped Adams.

As the duel continued with Van der Poel and Van Aert for the next three laps, Adams had a mechanical and stopped on the side of the track for an unusually long time to make adjustments. This allowed Iserbyt and Ronhaar to slip ahead. The duo of Van der Haar and Hermans also moved past, depositing Adams behind by 15 seconds.

Iserbyt had worked his way into solo third position as the sixth circuit of the muddy course began, 45 seconds behind the leaders and eight seconds up on the Baloise Trek Lions duo of Ronhaar and Van der Haar. The trio of Adams, Hermans and Mason trailed another 14 seconds later.

Van der Haar sensed urgency and accelerated, closing down the gap to Iserbyt and left Ronhaar to fend for himself. Van der Haar took a fresh bike near the end of the sixth lap and was quickly on Iserbyt’s back wheel.

On the penultimate lap, Van der Poel and Van Aert continued the vicious pace, but Van der Haar and Iserbyt had closed down a few…