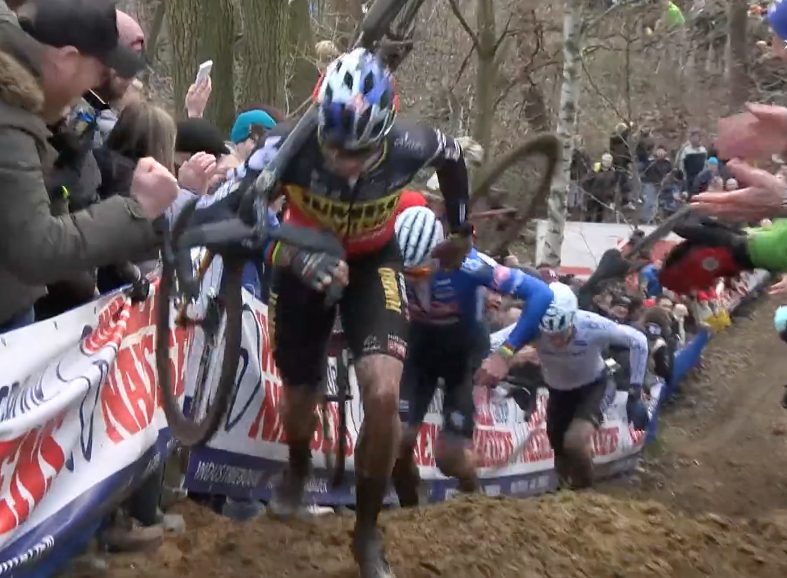 Wout Van Aert might have changed from Shimano to SRAM components for the new year, but it was an old fashioned puncture that ruined his fourth round of the X2O Badkamers Trofee on Tuesday. It was another dingdong battle between Van Aert and Mathieu van der Poel in Herenthals, Belgium, with the Dutchman taking the prize. In coming in third, Eli Iserbyt increased his series lead over Lar van der Haar by a single second.

On Sunday Iserbyt announced he was back. He pulled back the series lead from van der Haar with a triumph in Baal, his first victory in a month. Iserbyt had 1:27 over van der Haar and 1:38 over teammate Michael Vanthourenhout. Wout Van Aert and Mathieu van der Poel were back at each other after skipping Baal. Round 2 champ Tom Pidcock missed out due to his frightful crash in Baal.

Somewhat predictably, Van Aert and van der Poel dispatched Adams on Lap 3, but he stayed within striking distance. Van der Haar couldn’t hang with Iserbyt and Ronhaar. A bike change for Jumbo-Visma rider on Lap 4 made it necessary for him to catch back up.

Adams lost ground and then crashed on Lap 5, allowing Iserbyt and Ronhaar to eclipse him. Iserbyt went solo, Ronhaar and van der Haar 11 seconds back of the series leader.

On Lap 6 the Big Two continued to take each other’s measure as the crowds hollered them on. Van der Haar started to pull back Iserbyt.

Van Aert and van der Poel took a 38-second lead over van der Haar and Iserbyt into the penultimate lap. Who would strike first?

But it was on the last lap that Van Aert came undone. He shook his head, realizing he had a long way to go on an empty tire. Brit Cameron Mason did very well to place fifth.

The next round is Thursday in Koksijde, Belgium.