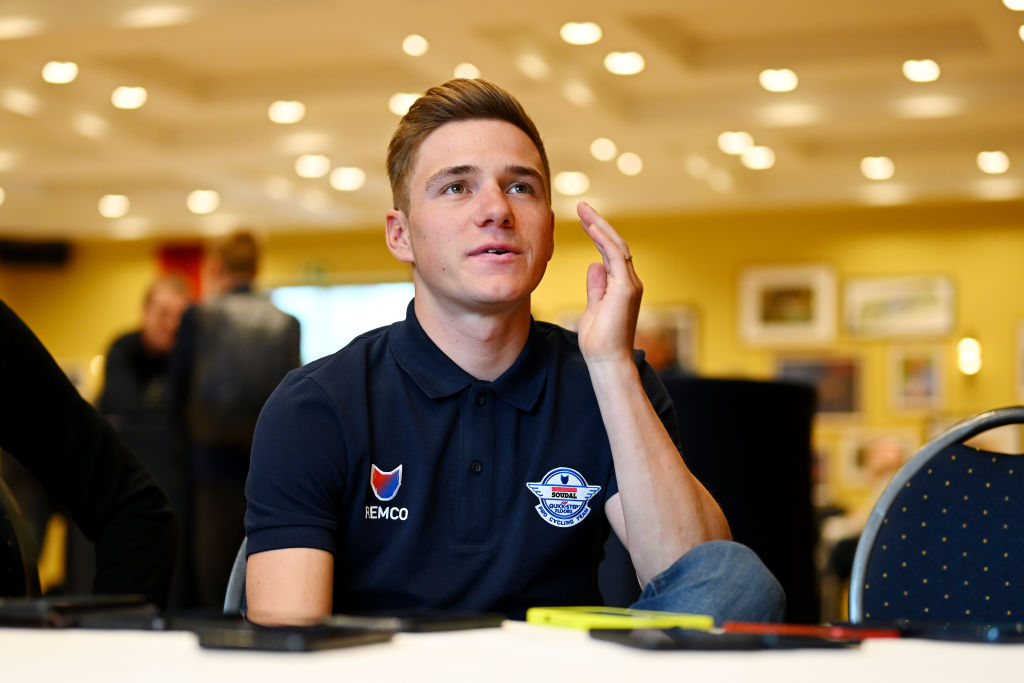 Remco Evenepoel will take a race-light and altitude-heavy road to the Giro d’Italia, aiming to replicate the build-up that saw him win the Vuelta a España last summer.

The World Champion had already confirmed that he will start his campaign at the Vuelta a San Juan in Argentina later this month, but he mapped out his programme in greater detail at Soudal-QuickStep‘s team presentation in De Panne on Friday.

There are only four races on his schedule ahead of the Giro, and just as many training camps at altitude.

After the Vuelta a San Juan, Evenepoel will next appear at the UAE Tour in late February, followed by the Volta a Catalunya in late March, and then Liège-Bastogne-Liège in late April. That makes for 22 days of racing before the Giro kicks off on May 6.

In and around those races, Evenepoel will spend his time training at altitude, with “big trips” planned ahead of Catalunya and one afterwards. There will be a shorter final tune-up camp after Liège before he travels to Italy for the Giro.

“It’s a lot of training, a lot of altitude camps, but we saw last year that it works for me, so there’s no need to change anything or try any different approaches,” Evenepoel told reporters at the Soudal-QuickStep presentation.

“For me, it works well to have a period that’s pretty calm, then blocks of racing which are more stressful. When I go to races, I go with the pressure to win or perform. Combining that with the camps, where there’s no pressure, just a job to be done, that’s what helps me deal with the stress. It helps me throw myself at my objectives.”

Evenepoel underlined that the races he’d selected were genuine objectives, rather than mere stepping stones.

“Every race I’m doing is with the idea of being on the podium or at least winning a stage,” he said. “I’m not doing a lot of races but they are all, apart from Argentina, at the highest level.”

As for the altitude camps, Evenepoel visited Livigno in Italy to great effect last summer but is set for a change of scene in the coming months, with the well-worn roads up Tenerife’s volcano Mount Teide set to welcome the 22-year-old.

“In Sierra Nevada and Livigno and the rest, the weather isn’t good at this time,” he pointed out. “For the moment, the first camp is in Tenerife, the other we’re not sure at the moment, but in the sun.”

After three week-long stage races that ramp up in prestige, Evenepoel is hoping Liège-Bastogne-Liège can act as the Clásica San Sebastián of 2022.

That was when he returned from two…