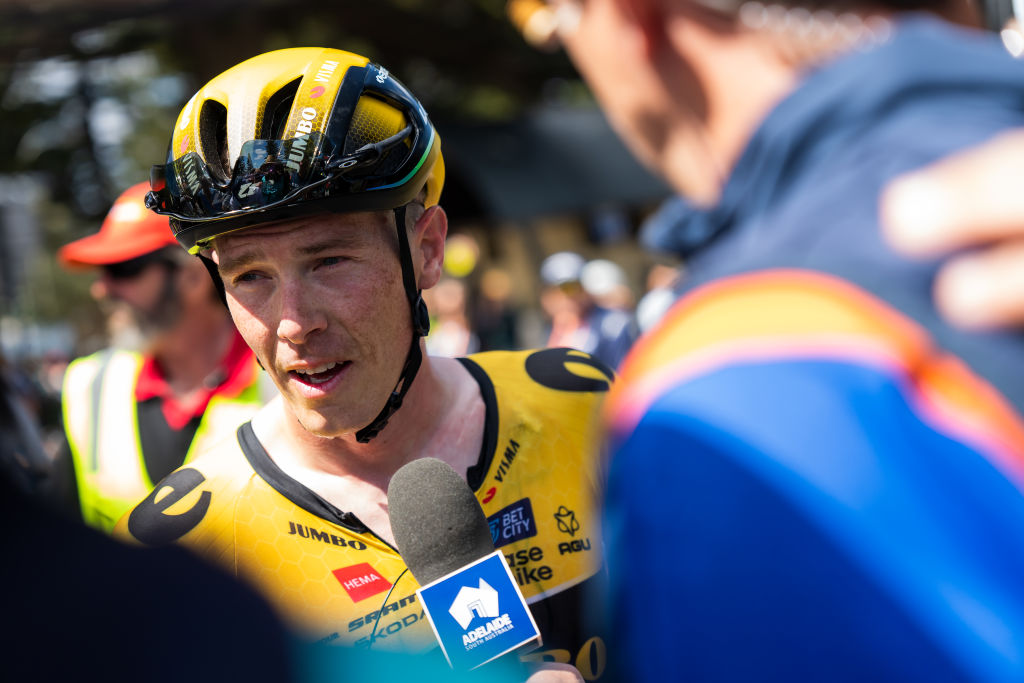 “It’s much more a Jay Vine climb than a Rohan Dennis climb,” was how new race leader Rohan Dennis described the ascent of Corkscrew Road, which is the final climb on Friday’s 116.8km stage 3 of the Santos Tour Down Under.

That presents a challenge for the Adelaide raised Jumbo–Visma rider as while he may have stepped into the ochre jersey of the race leader after winning stage 2 from a power-packed break of five, Jay Vine came second which leaves the UAE Team Emirates Rider just three seconds behind Dennis on the GC rankings.

“Tomorrow is a big day – we will see how Jay is climbing,” Dennis told reporters after stepping up to the podium on Thursday after his attentiveness to the move started by Vine paid off with the stage victory and overall lead.

“As you saw today he [Vine] was pretty strong and he was the one really pushing that break as much as possible so let’s hope I can be within striking distance over the top and maybe come back.”

“I will be watching him and not stressing too much… If he does get a gap, there is always a bit of time after the top but I don’t want to give him too much, so hopefully my legs agree with my head.”

Dennis has carefully targeted his home race this year, which has been absent from the international calendar for two years due to the COVID-19 pandemic. He is looking to place in the top 3 after winning the WorldTour event in 2015 and falling just one step shy of the podium in 2020 when the WorldTour race last ran.

The 32-year-old headed into stage 2 in 15th place overall, though was well-placed among the GC contenders. Then Hindley jumped right up into the lead on a stage which, while not without its tests, was not expected to cause such a big re-shuffle in the overall standings.

Stage 2 was also a stage that marked a complete reversal of fortunes for Jumbo-Visma at the race with stage 1 proving to be a challenge and Robert Gesink crashing, hitting his head on the tarmac, and leaving the race.

“Robert is pretty good with the whole positioning and running into these technical things but the guys rallied around really well and did everything possible,” said Dennis.

Rallying around Dennis is something the team is likely to have to do again, with there being no doubt that Friday will be a key stage in the GC battle. There are 2,442 metres of vertical ascent finishing with the Corkscrew climb, topping out just six kilometres from the finish and with an average gradient of 9.2% and a maximum of 24.4%.