Sam Bennett: The first sprint is always the most dangerous, but it all comes back to you 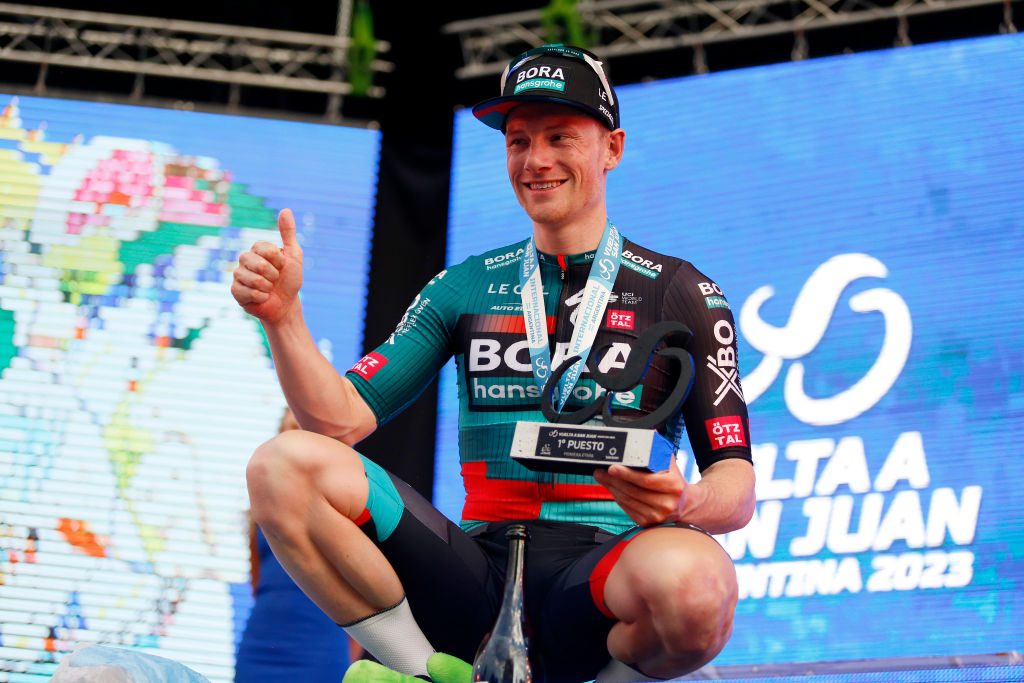 The mercury was still north of 30°C even as the sun began to dip on Sunday evening, a contrast with Ryan Mullen’s choice of metaphor as he reflected on his Bora-Hansgrohe teammate Sam Bennett‘s sprint victory on stage 1 of the Vuelta a San Juan.

“The plan is that by the end of the season, we’ll have this massive, giant snowball that keeps on growing,” Mullen told Cyclingnews after he had taken a seat beyond the finish line.

“Right now, we’ve got a normal-sized snowball, maybe a golf ball, but we’ve got to keep it rolling into something bigger. Maybe it’ll be a tennis ball by the end of this week…”

Bennett endured a largely trying 2022 season, which saw him return to Bora-Hansgrohe after two years at QuickStep, but he ended his campaign on a positive note with a pair of wins on the Vuelta a España and a game, attacking display at Paris-Tours.

For Bennett and his lead-out train, the aim was to carry that momentum through the winter and into the new campaign. Victory at their first attempt in Argentina augurs well for the year ahead.

“I’d be lying if I didn’t say I was nervous and excited,” Bennett said when he took a seat in the press room in San Juan’s Estadio Aldo Cantoni afterwards.

“But you could really feel that in the peloton: everybody’s nervous, everybody’s trying to find their flow and rhythm. The first one is always the most dangerous, but it all comes back to you in the moment.”

The Vuelta a San Juan may not be a WorldTour race, but its sprint field has a depth worthy of a top-flight event, with Fabio Jakobsen (Soudal-QuickStep), Peter Sagan (TotalEnergies) and Fernando Gaviria (Movistar) among Bennett’s rivals here.

For sprinters and their lead-out trains, the first outing of the new year is rarely without its teething troubles, and Jakobsen’s hopes unravelled when Remco Evenepoel led the Soudal-QuickStep the long way around a traffic island in the run-in.

The world champion complained afterwards that spectators had been crossing the road on the approach to the final kilometre. “It was hectic and dangerous. I almost hit a woman, I think,” he said. “It was perhaps an unacceptable final kilometre.”

Bennett and his Bora-Hansgrohe squad, by contrast, enjoyed a clear run.

“We haven’t raced for four months and when you get that taste of blood in the back of your throat you think, ‘Now I’ve got to make decisions that affect people’s lives behind me – erm, how do you do this again?'” Mullen said.

“But everyone nailed their job perfectly. When it came to…