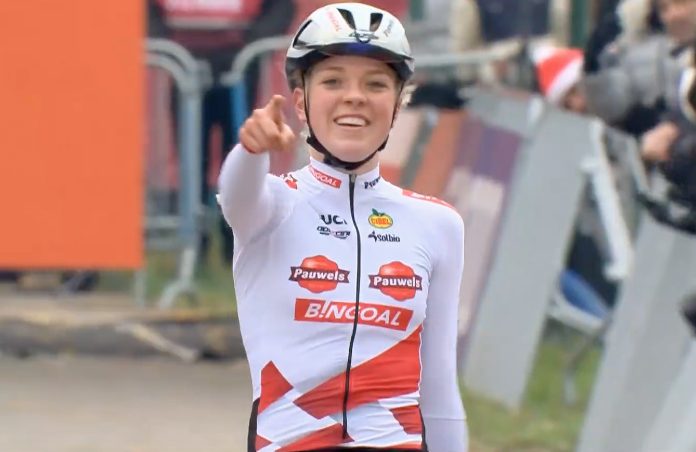 Shirin van Anrooij was the best in Gavere’s nasty, muddy 11th round of the World Cup on Boxing Day Monday. She won her first World Cup November 13 at Beekse Bergen. Van Anrooij had to battle her resurgent teammate Lucinda Brand for the triumph. Maghalie Rochette had a tough time on Monday, climbing off her bike on Lap 2.

Fem van Empel was not at Gavere to defend her 65-point gap over Puck Pieterse due to injuries suffered when she crashed out of the Val di Sole round. Van Empel therefore misses her last race for Pauwels Sauzen-Bingoal before switching teams to Jumbo Visma on January 1. Both Annemarie Worst and Lucind Brand were back in the Cup.

The Canadian contingent was immense. Maghalie Rochette, fifth in last weekend’s round in Val di Sole, led the way. Sidney McGill and Siobhan Kelly were the other elite women, with Christiane Bilodeau, Jenaya Francis, Ava and Isabella Holmgren, Madeleine Pollock and Geza Rodgers the U23 athletes.

Pieterse and Shirin van Anrooij were in the front on Lap 1, with Brand, Zoe Backstedt and Kata Blanka Vas chasing. Van Anrooij put Pieterse in her rearview mirror in the mud, doing very well on the climbs. The first lap was completed in 11:24, van Anrooij leading by 8 seconds. Rochette was 20th but dove down to 52nd. McGill was top Canadian in 28th. Sidney McGill was the top Canadian in 25th.

On Lap 2 of 4 Vas lost her lead over Brand and Backstedt by staying on the bike. The trio moved around Pieterse, who was having great difficulty with her machine. Van Anrooij took a big gap, leading by 19 seconds over her Baloise Trek Lions teammate Brand going into the third circuit. Rochette pulled out of the race.

Podium duo Brand and Vas put Backstedt behind them on the penultimate lap. Pieterse was back in fifth. Impressively, Brand closed right in on van Anrooij. McGill sat 26th and Isabella Holmgren 28th.

Van Anrooij pulled away again before the bell lap. Once more she pushed out a double digit lead. Pieterse and Vas were battled for the final podium spot. Vas lost Position 3 as both Pieterse and Backstedt ground their way around the Hungarian. Puck’s third place puts her now 40 points back of van Empel.

Round 12 is January 8 in Zonhoven, Belgium.